My grandmother Katarzyna Bosakowska Kowal was born in 1893 in Galicia, the part of Poland that fell under the control of the Austro-Hungarian Empire when Poland was partitioned. I don’t have a record of her exact birthdate. She died on May 6, 1966 in Staten Island, New York.

I was only five years old when my grandmother died and I only have a limited recollection of her. In my memory, she was a very serious (you might even say dour) person and the few photographs I have of her seem to bear that out. But I also remember her very lovingly making me and my sisters homemade bread and butter sandwiches in her kitchen in the old house on Storer Avenue on Staten Island. My sisters and I called  her “Grandma Cat,” because she had a cat. Our other grandmother was “Grandma Dog” because she had the dog.

My grandmother Katarzyna Bosakowska Kowal with my cousin Beverly Lembo, 1954 or 1955.

My grandmother Katarzyna Bosakowska Kowal with my cousin Tommy Parisi and my aunt Stella, 1954

I know from the 1920 and 1930 census that Katarzyna (who sometimes went by Katherine) immigrated to the United States in 1912 and that she married my grandfather Alex Kowal in 1916. By 1920, they had moved to the Charleston section of Staten Island where they went on to raise a family of seven children.

I remember hearing when I grew up that Katarzyna had other family members (siblings and/or cousins) who emigrated to the United States. I recall walking with my father many years ago near the old Second Avenue Deli and he told me he used to visit an aunt who lived in one of the nearby brownstones. And I can picture a stack of correspondence between my grandmother and a relative in Poland, indecipherable in Polish, although I don’t know where those letters are now. I also remember hearing that a Bosakowski emigrated to Brazil but I have no proof of this. Who were these other Bosakowskis? More on this burning question in a later post.

In my post below about my grandfather Alex Kowal, I explained how clues from the census allowed me to track down my grandparents’ 1916 marriage certificate from the New York City Department of Records. From that record, I know that my grandmother lived at 117 Henry Street on the Lower East Side of Manhattan (where, I figured out after a bit of sleuthing, three other Bosakowski families also lived). That building is still there as I recently discovered. 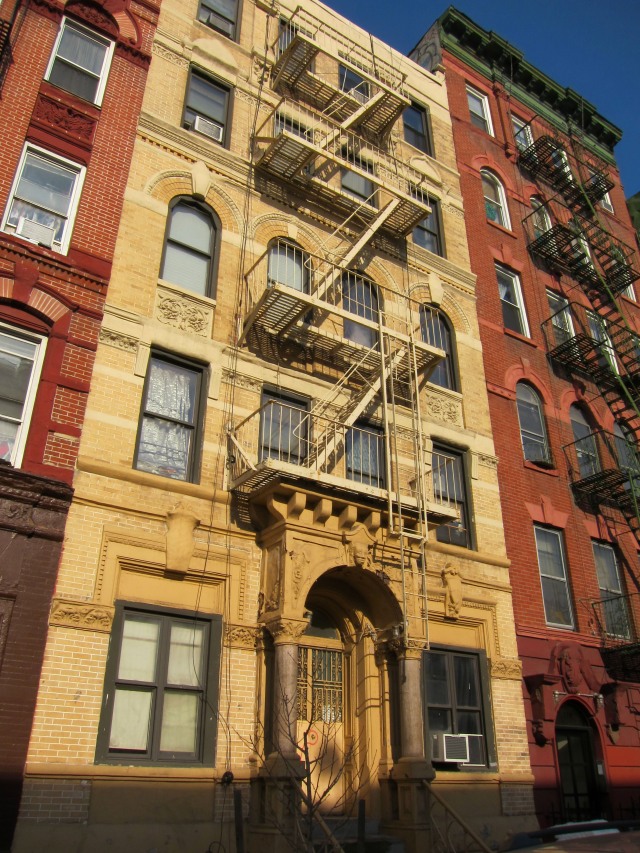 117 Henry Street on the Lower East Side of Manhattan. Still home to immigrants (mostly Latino) just as it was when my grandmother walked out the front door in her wedding gown in November 1916.

More importantly, the marriage certificate gave me the names of Katarzyna’s parents back in Europe – my great grandparents Joseph Bosakowski and Maria Buchna Bosakowska – and the name of the Katarzyna’s birthplace. Score!

The latter was a bit harder to decipher but I’m pretty sure “Zalisci” is actually Zaliztsi in the Ternopil district of Ukraine (which went by a number of names including the Polish Zalozce). Back when Katarzyna lived there, this was in the far northeast corner of Austro-Hungary, just across the border from Russia. After World War I, it was part of reconstituted Poland but after World War II; when Poland’s borders moved to the west, it became part of the Soviet Union; and when the Soviet Union collapsed it became part of Ukraine. I’ll write more about my research on Zaliztsi in a later post.

Thanks to a very kind person who answered my post on the ancestry.com discussion boards, I recently learned that the Mormon Church has microfilmed records of Roman Catholic parish records from Zaliztsi for the period 1785-1913 so I’m actually hopeful that I might be able to find some additional records for Katarzyna and her family members!

So I hope to have much, much more on Katarzyna Bosakowska Kowal before too long. In the meantime, here’s one final picture of my grandmother, taken at my parents’ wedding reception in 1959. When you spend time scanning old slides as I have been doing recently, you start to notice wonderful little details. I love that my grandmother is smiling in this picture and the way my father is affectionately holding her hand.