Keeping up with the Bosakowskis

My grandmother Katarzyna Bosakowska came to this country in 1912 – one of at least sixteen Bosakowski family members who left the town of Zalozce, Austria for the United States in a chain migration that began in 1905 and continued for two decades. Their destination was Manhattan’s Lower East Side, where they lived in tenement buildings in the shadow of the newly built Manhattan Bridge. Some stayed for a short while before returning to the old country. Some bounced back and forth between Zalozce and New York before finally settling in a single place. But most of them came to New York to start a new life and they never looked back.

Postcard of Zalozce, Austria circa 1910. I managed to find it on eBay! 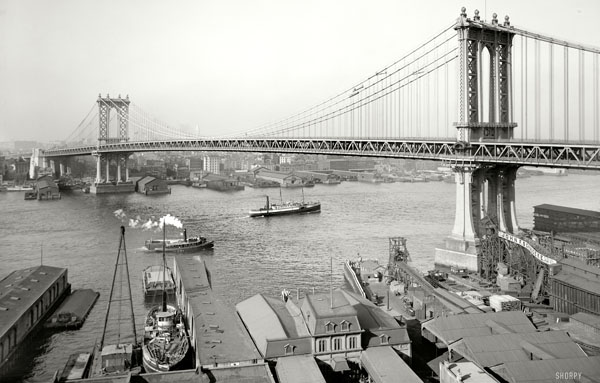 I have been able to group this cohort of immigrants into three family clusters. For the most part, our cast of characters was born in the 1880s or 1890s, and it would appear that they were all cousins.

The first group – Ignacy, Jan, Kata, Ludvika and Karolina – all came to America between 1905-1907. Their parents were Piotr Bosakowski and Maria Czechowicz Bosakowska.

During that same period, in 1906, Michal Bosakowski settled in New York too. His parents were Karol Bosakowski and Katarzyna Czechowicz Bosakowska. (It’s intriguing that Piotr and Karol Bosakowski both married women named Czechowicz. Were they sisters?) In the ensuing years, four of Michal’s siblings also made the journey: Pawel (1910), Piotr (1913), Antoni (1913) and Agnieszka (1921). Michal’s son Andrej also came over in 1921. And it seems that that at least one brother – Franciszek – stayed behind in Zalozce.

My grandmother Katarzyna left Zalozce in 1912. She was the daughter of Jozef Bosakowski and Maria Buchna (or was it spelled Buczna?) Bosakowska. She was preceded by her younger sister Honorata, who made the trip in 1911. Brother Wincenty followed in 1913. At least two other brothers – Stanislaw and Walter – stayed behind.

In future posts, I’ll lay out what I know about their journeys to America (and, in some cases, their journeys back). And I’ll follow them through the early decades of the last century, when the Lower East Side was practically crawling with Bosakowskis.

11 Responses to Keeping up with the Bosakowskis