On May 26, 1905 Ignacy Bosakowski sailed into New York harbor on the S.S. Carpathia – a ship that would become famous seven years later when it rescued the survivors of the Titanic. 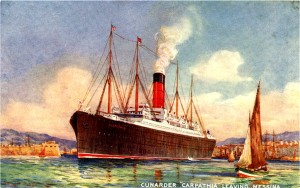 Ignacy boarded the ship in Trieste two and half weeks earlier, on May 9, and the ship then made stops in Fiume and Palermo to take on additional passengers. Like most of the passengers, and like all his family members who would follow, Ignacy was booked in steerage. So I imagine the crossing was pretty arduous.

As a steerage passenger, Ignacy would have been ferried from the ship to the immigration processing center on Ellis Island. It must have been a nerve wracking process but Ignacy seems to have sailed through without too much difficulty. Significantly, he does not appear on the list of passengers detained for further scrutiny.

According to the ship’s passenger manifest, Ignacy was 27 years old. He came from Zalozce, Austria, where he worked as a “laborer.” Like most of the passengers, he claimed he was able to read and write. He paid for his ticket himself and declared he had $10 to cover expenses.

Feodor, who appears again in this story, was actually a cousin. I’m eager to find out more about him and the connections between the two families. Unfortunately, Feodor didn’t leave much of a paper trail.

When Ignacy was finally cleared for admission, he became one of 1,027,421 immigrants who entered the United States that year, according to government records. Of these, 788,239 came through the port of New York.

Ignacy found an apartment at 226 Madison Street, not far from Feodor’s place on Essex Street. Over the next four years, he would move several times. And he would be joined in short order by two sisters, a brother, a cousin and his wife.

On January 5, 1906, Ignacy’s sister Kata arrived on the S.S. Brandenburg, which sailed from Bremen thirteen days earlier. According to the passenger manifest, Kata was 16 years old and worked as a “maid servant” back in Zalozce. She could read but not write. She paid her own passage and declared she had $10 to cover expenses. The customs official must have begged to differ because he crossed this out and wrote $5.

That was no small thing. Immigration officers were vigilant when it came to eye ailments and many immigrants were sent back to their home countries if they showed the slightest sign of infection.

For some reason, though, Kata made it through. She wasn’t detained for “special inquiry” on health grounds. She was simply put on the list of detained aliens who had to wait until a family member could come and vouch for them. This appeared to be the norm for “unaccompanied” females. According to the records, Ignacy came for her the next day. But Kata’s first night in America was spent in an Ellis Island dormitory and the records duly note that she was fed breakfast, lunch and dinner during her detention.

A few months later, on May 23, 1906, Michal Bosakowski arrived aboard the S.S. Trave, sailing from Bremen on a journey that took twelve days. Michal was Ignacy and Kata’s cousin and he listed Ignacy as his contact in the United States. 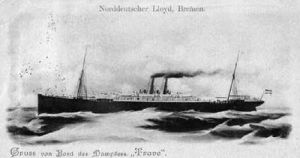 It’s possible that this was Michal’s second trip to America. The passenger manifest states that he spent the years 1903-1905 in New York (or perhaps he was here in 1903 and 1905). Unfortunately, I can’t find any evidence of an earlier trip.

According to the passenger manifest, Michal was 25 years old and worked as a sailor. (Maybe that’s how he was able to visit New York earlier.) He stated that he could read and write. He paid for his own trip and declared that he had $20 to cover expenses – although a customs official crossed this out and wrote $5 in its place.

The document indicates that Michal was married but his wife Klementyna was not with him. I think she came to New York eight years later, in 1913, although I have not located the immigration records that would back this up. It also appears that Michal left an infant son behind. Andrej Bosakowski, who was born in January 1905, eventually came to join his father in the States in 1921, when he was sixteen years old.

The three men made it through customs without being detained. It’s not clear where Michal first found a place to live. Perhaps he stayed with Ignacy and Kata. 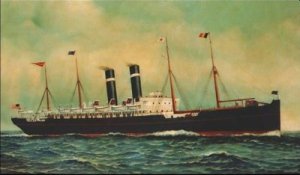 According to the passenger manifest, Jan was 23 years old and single. He worked as a laborer in Zalozce Stare (Old Zalozce). He stated he was able to read and write. He paid for his own ticket and declared he had $10 in cash on him – although a customs official corrected this to show he had $8.

Jan appears to have been traveling alone. He listed his brother Ignacy as his U.S. contact and, like Michal, he seems to have sailed through without being detained. I’m pretty sure he went to live with Ignacy and Kata.

Next to arrive was Lukwika Bosakowska, sister to Ignacy, Kata and Jan. She sailed on the S.S. Vaderland, embarking from Antwerp. She arrived at Ellis Island on May 8, 1907 after an eleven day trip. 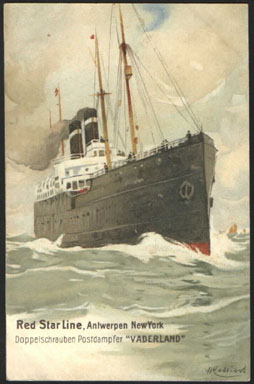 It’s worth noting that Ludwika’s mother and aunt both had the maiden name Czechowicz. So it’s fair to assume that the three girls were all cousins even if the exact relationships are unclear.

The other interesting thing is that Marya is initially listed as Russian while Ludwika and Anna are identified as Polish. Then, someone replaced Russian with “Ruthenian,” a term typically used to describe Ukrainian Catholics. Was the Czechowicz family Ukrainian?

The passenger manifest indicates that the three women worked as servants in Zalozce. They said they could read and write. They paid their own fares. And they each declared that they had $10 to cover expenses, but once again a customs official corrected the record to show that Ludwika had $4, Marya had $1 and Anna was broke.

The three women, unaccompanied by men, were held in detention until someone could come vouch for them. Like Kata, they spent their first night in America in an Ellis Island dormitory and were released the following day in the custody of relatives. The record shows they were each treated to breakfast, lunch and dinner during their detention.

Starting with Ludwika’s arrival, the immigration records provide a bit more detail about a person’s appearance. So we know that Ludwika was 4’ 11” tall and that she had a fair complexion, blonde hair and blue eyes. Unfortunately, that’s just about all we know about Ludwika. I have found no other documentation of her life in census records or New York City vital records. I wonder what became of her.

The next and final family member to come over in this chapter was Ignacy’s wife, Dominika. She arrived on March 3, 1909 aboard the S.S. Kroonland, which embarked from Antwerp eleven days earlier.

According to the passenger manifest, Dominika was 26 years old and had no occupation. She said she could read and write. She paid for her own trip and had $10 to cover expenses. (For once, this claim held up under the custom officer’s scrutiny.) She was five feet tall, had a fair complexion, light hair and blue eyes.

Dominika was traveling with Jozefa Lobaj, the wife of Ignacy’s cousin Julian Lobaj, who had come over with Michal Bosakowski in 1906. (More evidence of connections between the two families.) Like the other women, Dominika and Jozefa were detained until relatives could vouch for them. Fortunately, Ignacy and Julian were able to come that same day. The two women were only detained long enough to have lunch.

As a new decade dawned in 1910, this first group of immigrants set themselves to the task of building new lives on Manhattan’s Lower East Side. Among many new beginnings was the first family wedding on U.S. soil, on January 30, 1910, when Kata Bosakowska married Adam Telechowitz.

Adam was born in Minsk in 1886 (give or take a year). His parents were Vasil and Jozefina Dombrofsky Telechowitz. The ceremony took place at St. Stanislaus Roman Catholic Church on East 7th Street, where most of the family’s marriages, baptisms and funerals would take place. The witnesses to the wedding were Eduard Wirth and Alexander Lobaj (another Lobaj). And on the marriage records, the bride and groom signed with an “x.”

From the 1910 census records we see that Kata and Adam lived with Ignacy, Dominika and Jan in the same (presumably small) apartment at 82 Allen Street. That building is still there.

Neither of the married couples had any children.

I have not been able to find Michal in the 1910 census. I suspect he was living with Feodor and Julian Lobaj at 122 Essex Street. It seems that the census taker was cutting a few corners over on Essex Street – the 1910 census lists only one person living at number 122.

Similarly, Ludwika is nowhere to be found. Why didn’t she live with her sister and brothers in the apartment on Allen Street? Perhaps she lived and worked as a domestic servant, as my own grandmother did.

Over the coming decade, more Bosakowski family members would make the journey to the Lower East Side and a few would decide to return to Zalozce. This will be the subject of a future post.