The mystery of the missing tombstone

My sister Cathy and I spent Saturday morning visiting a few cemeteries in central New Jersey. We knew, from the Find A Grave website, that several of our ancestors are buried there.

We had an immediate success in a cemetery directly across the street from Cathy’s house. At the First Baptist Church Cemetery of Hopewell, N.J., we found the tombstone of our fourth great-grandfather, Jacob James Wyckoff. The stone looks like it had been recently knocked down. We found it leaning against the churchyard’s outer fence. The gravesite was probably right nearby but we couldn’t be sure. 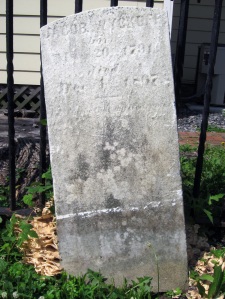 Mary Hegeman was born September 8, 1795 and died a few years after her husband on February 8, 1873. There was no sign of her grave, unfortunately.

Jacob and Mary Wyckoff’s oldest child, James Wyckoff (1813-1887), is supposedly buried up the hill at the Highland Cemetery, along with his wife Charlotte Matilda Voorhees (1821-1907). They were our third great-grandparents. So we headed there hoping for another quick success. Unfortunately, we ended up wandering around in circles in the hot sun wishing (1) we had thought to put on sunblock and (2) that we had called ahead to get a cemetery plot number. We did see lots of Wyckoffs and lots of Voorhees, but no sign of James and Charlotte Matilda.

Next stop was the Presbyterian Cemetery in Kingston, New Jersey, where our great-grandparents Jacob and Tillie Agin lived and where our second great-grandmother Mary Miller married noted “woman-hater” William Van Note. Cathy remembers going there with our grandmother Anna Agin but, alas, we found ourselves looking for needles in haystacks once again, repeating that mental note about sunscreen and calling ahead (see above).

Pressing on, we drove over to Princeton Cemetery. According to Find A Grave and some other sources, our second great-grandfather (and Civil War veteran) Samuel Davis Agin (1841-1915) is buried there along with his wife Rhoda Wyckoff (1850-1907).

In a now discouraging pattern, we scoured the cemetery to no avail. The cemetery office was closed but, luckily, we met a very kind gentleman, Mr. Sutphin, who was the cemetery’s former superintendent. We explained our difficulty in finding the grave of our Civil War ancestor.

He pulled out a yellowed notebook and we saw with our own eyes the entry for Samuel Davis Agin, dated August 1915. He was buried in lot 968, map 2.

Mr. Sutphin pulled out an ancient cemetery blueprint and we saw our great-grandfather’s name on a plot located fifty feet away from where we were standing. We hurried over and found… nothing.

The neighboring tombstones indicated on the map were all there. But there was no tombstone on lot 968. You could actually see two rectangular depressions where the bodies of Davis and Rhoda are buried. But there was no marker and no sign that a marker was ever there. What a huge disappointment.

Is it possible that nobody ever bothered to erect a tombstone for Davis and Rhoda Agin? Rhoda died eight years before Davis did. Presumably he went to visit her grave. And Davis was survived by five children who all lived in the vicinity. Wouldn’t one of them have wanted to place a marker at their father’s grave? Davis died on the 50th anniversary of the end of the Civil War. Wouldn’t a Civil War veteran be honored with a tombstone?

Mr. Sutphin said there may never have been a marker. He said this was not unusual given the cost. I find this hard to believe, though. The Princeton Cemetery was pretty ritzy as cemeteries go. (President Grover Cleveland is buried there.)

Interestingly, lot 968 is located beside the road just as you enter the cemetery – and it’s immediately in the path of your car when you back in and out of the office driveway. Is it possible the grave marker was accidentally knocked down by a car or truck in the past 96 years? 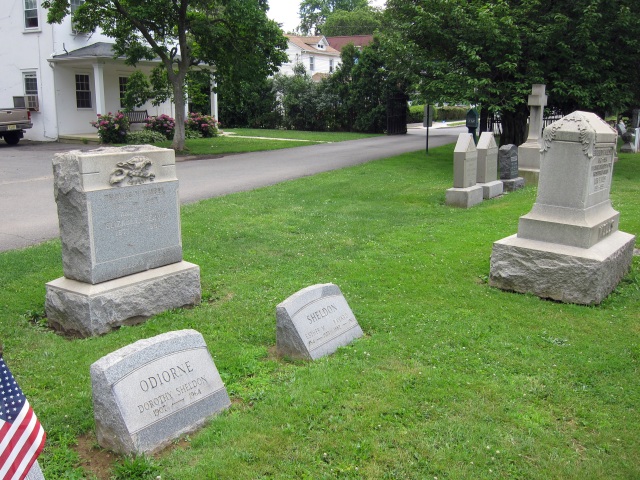 I wonder if there is a way to solve this mystery.

7 Responses to The mystery of the missing tombstone