My Sabol ancestors in the 1869 Magyar Census

I recently came across census records from January 1870 providing an amazing snapshot of life in the small Slovak village of Trebejov. My great-grandfather Andrej (Andrew) Sabol was born there in 1872.

The records were part of the 1869 Magyar Census, an ambitious effort to collect demographic data for the Upper Hungary region of the Austro-Hungarian Empire (present day Slovakia). They show that Trebejov had 208 residents living in 24 households and a small Roma encampment. They include a separate return for each household, enumerating each of the village’s residents individually.

Several of my ancestors can be found in these records. In this post, I will take a look at my second and third great-grandparents from the Sabol family line. They are enumerated in the return for Trebejov 11, the same family address noted in the registers of births, marriages and deaths kept at the Evangelical Lutheran church in the parish seat of Obišovce. In another post, I will write about my second great-grandfather, Andrej Daniel, who is listed in the return for Trebejov 14, where he lived with his first wife Anna Filak. A decade later, after Anna died, Andrej would marry the recently widowed Barbara Mačka from the neighboring town of Kysak. They would have one child together – my great-grandmother Maria (Mary) Daniel, who emigrated to America and married my great-grandfather.

[Note: The return was printed in both Hungarian and German, and the census taker – named Kalmány – made his notations in German. So I will use the German terms here.]

The Sabol family at Trebejov 11

On January 15, 1870, there were thirteen people living at Trebejov 11, divided into two family units – the Sabols and the Czibuláks. The two families were related through marriage.

From page one of the return, we see that the house consisted of two rooms – a living room (Zimmer) and bed chamber (Kammer) – plus an antechamber (Vorzimmer). The rooms were all on ground level (zu ebener Erde). The household operated as a farm (Wirtschaft) so there was also a barn (Scheune). 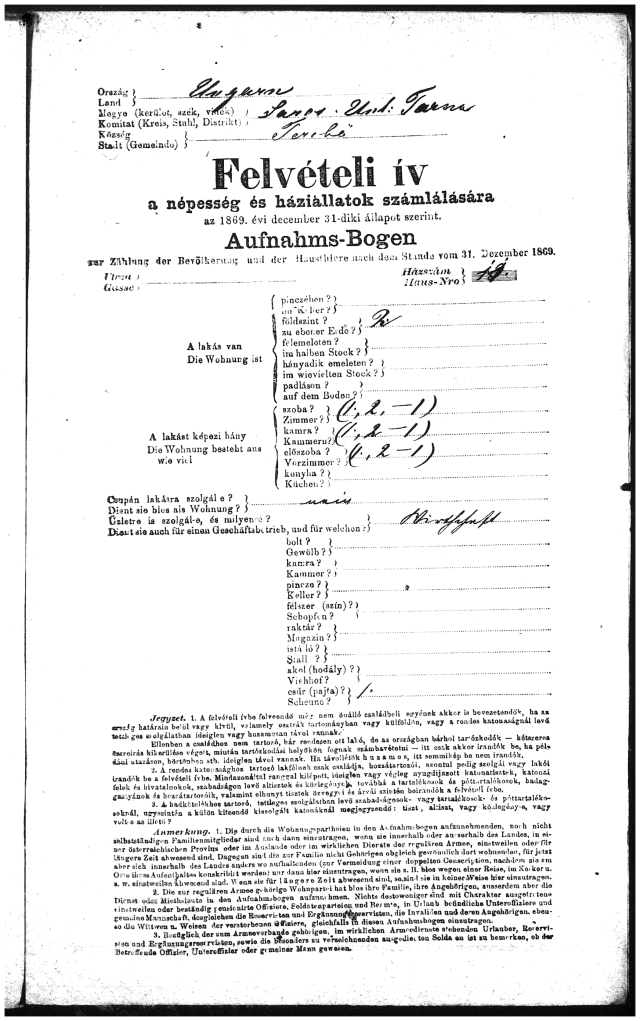 First page of census return for the Sabol-Czibuljak household in Trebejov, dated January 15, 1870. Click to enlarge.

The second and third pages of the return provide detailed information on the thirteen individuals living in those two rooms. They were all members of the Evangelical Lutheran Church of the Augsburg Confession (along with four-fifths of Trebejov’s residents).

There were seven members of the Sabol family there – three married couples and an infant – spanning three generations. On the form, the family name is recorded as Szabol (“sz” sounds like “s” in Hungarian). In other records, it is written Szabo. As I noted in an earlier post, the family name comes most likely comes from the Hungarian word szabó, meaning “tailor.” It was spelled in various ways but Slovaks would have spelled it Sabol. It’s also interesting to note that people’s first names are recorded in their German form. Other records use the  Hungarian form. Again, I’m pretty sure that the people of Trebejov used traditional Slovak names, so I will use them here. Pages two and three of census return for the Sabol-Czibuljak household in Trebejov, dated January 15, 1870. Click to enlarge.

The head of the household was 61 year old Michal Sabol, my third great-grandfather. He is listed on line 1. According to the census record, he was born in 1809. I know this is accurate since I have actually found Michal’s birth record dated October 26, 1809. His occupation, according to the record, was farming (Landwirtschaft).

From my search of church records, I know that Michal and Anna had at least six children. Two of the six – both newlyweds – lived with their parents at Trebejov 11.

On lines 3 and 5, you can find my second great-grandparents Jan Sabol (born 1834) and Alžbeta (Elisa) Filak (born 1843). Their newborn son Jan, my great-grandfather’s older brother, is listed on line 7.

Meanwhile, on lines 4 and 6, you can find Andrej Sabol and his wife Dorotha Filak. Andrej was Jan’s younger brother. He was the father of Andrej (Andrew) Sabol Jr. who also emigrated to America and served as a witness to my great-grandparents wedding in 1896. I wrote about this  “other Andrew Sabol” in an earlier post.

Jan and Andrej’s occupation is listed as villager (Dorfer), I think. I’m not sure what this is supposed to convey. Presumably the brothers worked on the farm. I can’t make out the occupation for their wives (the same term is used for both) or for baby Jan.

Columns 8 through 12 on the right hand side of the form seeks information about profession, place of birth, residency and citizenship – nothing very revealing.

Column 13 asks whether the person can read or write. The census taker was instructed to write “can” (kann) or “cannot” (kann nicht) for each. On line 3, for my great-great-grandfather Jan, the census taker indicated kann. He’s the only one. Is this a mistake? Or was Jan the only member of the family who learned how to read and write?

From column 14, we learn that Andrej was serving as a soldier on active duty (see the designation Soldat in the far column on the right).

There were six members of the Czibulák family living with my Sabol ancestors. (The name is recorded Czibuljak here but I’ll use Czibulák.) The head of the household was 39 year old Jan Czibulák, a farmer from the nearby town of Žehňa. Jan’s wife was 33 year old Alžbeta Lisska. The Lisska family was related to the Sabols through marriage in an earlier generation. Several members of the Lisska family once lived with the Sabols at Trebejov 11 but, by 1869, they had moved to a different house.

The inventory of livestock

Because most people lived on farms at that time, the census return included a separate livestock inventory form.

Livestock schedule from the census return for the Sabol-Czibuljak household in Trebejov, dated January 15, 1870. Click to enlarge.

From this, we know that the Sabol-Czibuljak household had three horses – a mare and a gelding (both light colored), and a colt less than three years old. They also had two cows, a calf and two oxen, along with three pigs. This suggests that the families were relatively affluent. Many households in the village made do with much less.

The census, of course, only captured a moment in time. No one could have known, on that day the census taker came to town, that five of the thirteen people living at Trebejov 11 would be dead within the next few years.

Michal Sabol died of a stroke just two months later, on March 6, 1870. His wife Anna passed away on April 20, 1873, probably from gout. And three members of the Czibulák family – mother Alžbeta and daughters Anna and Alžbeta – all died during a three-day period in June 1873 when a cholera epidemic swept through the village. I wrote about that tragedy in an earlier post.

3 Responses to My Sabol ancestors in the 1869 Magyar Census